There is a blog I like to read that specializes in what the author refers to as "Wordless Wednesdays" where she posts a photo or two instead of writing. I thought I could do a bit of the same today, in a lazy-Sunday sort of way. I'll have to caption the pictures or you'll wonder why I'm showing you all a photo of my sheets and pillows. Here in pictures I offer you all a slice of our daily life and a few snippets from weekend road trips we've taken in the Juarez/New Mexico/El Paso region:

Having a Fur Family in the Foreign Service

It's no surprise given the title of this blog that my three Tabbies are as important to me as any other family member. We've been together since they were six weeks old; two are littermates and one was from a box in front of the grocery store. In the past two years, we've moved them to four new homes on two continents. They've endured a six-day road trip in the back of the car with a different hotel room at the end of each long day. All this, and they will each turn 15 in the coming months.

Is this an ideal life for cats, or for pets in general? No, it's not. Cats prefer routine and a consistent environment. Many don't do well with change and often their stress isn't outwardly apparent. The stop eating, stop drinking, stop using the litter box or go where they oughtn't. They can become prone to anxieties, infections or illness.  Given all this, can they still thrive in such a lifestyle? Yes.

So if we love our pets so much, why would we subject them to all the moving and the trauma of travel? Because for animals that are long-time family members, I believe they love us equally, and would prefer to be with us, their trusted caregivers, than left behind. Having said that, there are some cats and dogs whose personalities are simply not a match for the FS life, and it is kinder to leave them in the US with a new "forever home" where they will transition only once instead of every two years. I'm mostly speaking of cats who are accustomed to having outside time and get very anxious/angry being kept inside. Or high-energy dogs who would make themselves and everyone around them miserable living in a high-rise apartment in Shanghai, or while their owners spend 10 months in a one-bedroom apartment while learning Arabic at FSI. Or perhaps very elderly pets whose  health has become frail and the stress of travel could potentially put them over the edge. In cases such as these, family, friends or rescue shelters would be the better option, as hard as that could be at first for all involved.

A new FSO I know recently shared this photo of their family's older dog and their young son. He captioned the picture, "This is why we stuck you in a box under the airplane and carried you half-way around the world." The family gave me permission to use this picture, which to me encapsulates exactly why we bring our animals to the places we do instead of leaving them behind. 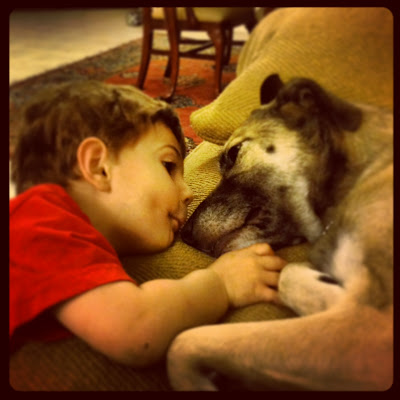 The love in the boy's eyes for his dog, and in her eyes for him is not just anthropomorphic nonsense; it's real. Our animals are capable of the same attachments and bonds as we are to each other, and while the travel and adjustment time is certainly not ideal for them, in the end - I'd never trade their presence in our ever-changing lives.

Our Tabbies have done a remarkable job at adjusting, especially given their age and the fact that we haven't had a full two years in one spot yet. The first move was the hardest adjustment, especially since they'd lived in our same house since I brought them home as kittens. The Oakwood apartment had no yard, no familiar smells and that lady with the cat grinding machine came in once a week unannounced to clean up the place. There were many days spent under the bed, with me coaxing them out only for meals, or me just giving up and sliding the bowl in front of the hidden noses. By the second time they arrived at Oakwood, they recognized the building, the apartment layout, the balcony, and there was no under-the-bed silliness. Arriving in Juarez after the long drive, they explored the new house eagerly, claimed the best sunny spots immediately and within a few days were wanting to explore our enclosed back yard.

But we're not just relying on their good natures and luck to make these moves successful, I also spend a LOT of time and energy attending to their health and comfort. To summarize this:

In the end, it is worth it to have our pets with us. If we had young children, as my friend in the first picture does, I'm certain that the pets would help the kids feel at home in their new place, too. While the parent(s) go off to work, the kids still have their companions and vice-versa. As I write this, I have the original laptop, Toby, vying for his rightful spot on my thighs, and Dodger is on the table at my elbow. (Cats are so helpful with typing!) They have their new yard, the back of a new sofa to lounge across, stairs for the fist time to help them keep active and all sorts of new birds to watch. For as long as they're healthy and able, the Tabbies will always be our EFMs (Eligible Furry Members).
Posted by Tabbies in Tow at 5:35:00 PM 8 comments:

It's been one month now since we packed the Tabbies and our belongings into the car and headed for the border. That sounds like a long time, but the city and the region in general still feel very new and very novel. Each morning, I look outside to see what kind of day we're going to have, and by 6:30 am the sun is already streaming through the windows. It makes me happy each morning to see these clear blue skies, and I greet the Consulate guards with a "Good morning, and what a beautiful day it is!" They smile, politely because - let's be honest here - we live in the desert and it's sunny about 330 days per year. But to me, it's still a gift each morning to have that reliable blue overhead. Of course at this time of year, it's nearly freezing each night and so far has only hit the mid-60s at the height of the day. You might just hear me singing a different tune come July when it's 108.

While the climate and the scenery is so foreign, the cultural differences are more subtle. Living on the border is a land in and of itself, neither 100% of either country. In Colombia, we had zero expectation that the taxi drivers, doormen, waiters, or just regular people on the street would speak English. Every greeting defaulted to Spanish. But here, we always start in Spanish and frequently the response comes back in only slightly-accented English. Our television, with only the rabbit-ears antennae we're using for reception, gets a few El Paso stations perfectly, and only a handful of fuzzy Mexican channels. So we end up watching US news, listening to NPR each morning on the radio, and living what feels to be an American life.

In fact, I think our life here might just be more American than the one we had before. For starters, I'd never been to a Wal-Mart before moving to Juarez, and now have a Costco membership - for the first time. We find ourselves strolling the aisles of Home Depot on the weekends, among regular Mexican families also picking out grills, throw rugs, and potted plants. Sure, about once per week we pop over to El Paso, usually to buy pet supplies (WHY is clumping cat litter priced like gold in every other country? WHY?!), and also to buy all the bits and pieces that the Mexican groceries don't carry, like ricotta cheese, dryer sheets (another WHY?!) or Greek yogurt. Being in the US is obviously easy and familiar, but I'm starting to feel a sense of belonging to the other side, the Mexican side instead. I like to tell people in El Paso that we live in Juarez, and then tell them how much we like it, just to see them react. Naturally, most people have been here longer than a month and can remember well when the city earned it's frightening reputation for being the Murder Capital of the World. But now, the level of violence has dropped below that of even some US cities. And after walking through the Parque Central and seeing families feeding ducks, couples kissing on benches or teenagers teaching each other break dancing moves in the community center - it just feels peaceful and comfortable. Maybe I'm fooling myself, or maybe it really is pretty okay.

The other night we returned from a day trip to New Mexico in the early evening, driving downhill towards Juarez and over the border after dark. The lights of our new city spread out before us, the mountain range to the west silhouetted in the last bits of sunset. Directly over the river (the Rio Grande/Rio Bravo is a now just a dusty depression - how disappointing it was to learn that!), Mexico begins: with its street vendors walking the lines of waiting cars selling candied apples, brooms, Chiclets or bags of fruit; with the  potholed streets that lack storm drains and therefore flood whenever it rains; with the cheap dental offices hoping to attract a slice of the medical tourism business; and with the ever present street-side comida rapida stands. It DOES feel different, and I'm glad it does.

We joined the Foreign Service hoping to be out of our element, to have to figure things out, to bore our friends for years with stories that start with, "Well, when we were in Upper Volta..." But here in the Borderland, the differences certainly exist, but they're more subtle. Like the fact that turning left is seemingly prohibited, and instead an intricate system of u-turns has been established so that drivers must flip a u-turn and then turn right instead. Or the fact that there are guys in every parking lot who watch your car and then help you back out of your space for spare change.

While it would be easy to live here and base our lives on the El Paso side, as many of my coworkers do, for us it wouldn't be as much fun. I'm thrilled to have conversations with the nice Mexican families in the hot dog line at Costco, or while feeding carrots to the mascot giraffe at the park (his name is "Modesto"). It's truly a hybrid life here, but I think we're going to dig in just fine. And hey look - it's sunny again! 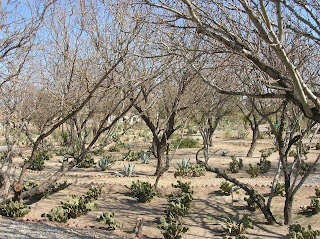 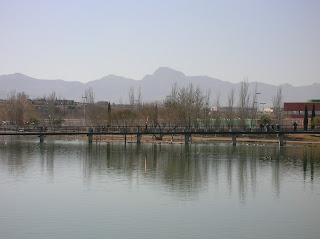 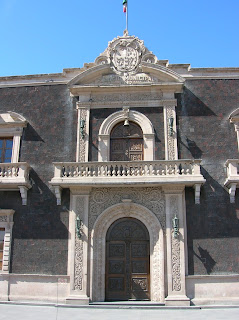 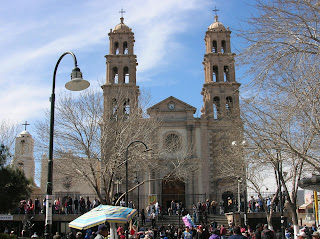 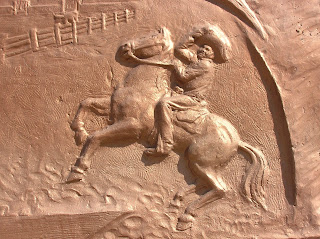 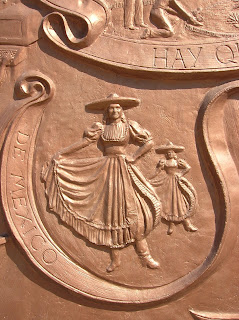