I was excited for our plans yesterday to pack our bikes into the back of the car and head to an expansive, hilly park at the base of the San Salvador volcano.  It's not far away from where we live and is criss-crossed with walking and biking paths, but for no good reason we've only been once before and never with our bikes.  Given the blue skies, light breeze and no humidity - it was the perfect day to get out and get moving.

Although we're a few months into the dry season, the landscape is still blooming and the Salvadoran national tree, the maquilishuat has just started opening its pink flowers. I double take each time I see these as they look like huge Japanese cherry trees in bloom.  We headed out along a wide bike path running between a busy highway and the park, cruising under a few maquilishuat trees.

We'd only been cycling about 15 minutes when we passed a small stable alongside the path.  There was a man delivering full water buckets to the horses, so of course I had to stop and ask him about his charges.  The tidy stable was a mounted police base with four large horse stalls below and living quarters for the officers above.  A clothesline full of uniform pieces and t-shirts waved in the breeze under the trees alongside the stable block, near a stack of firewood, an ashy pile of burned garbage and a small cooking fire heating a pot of something for the officers' lunch.  I chit-chatted with the officer for just a few minutes about the horses, what breed were they? ("criollo" = local horse), which was his? (none, we all switch horses) and some basics about where they patrolled and why.  He told me that besides patrolling the enormous and steep park (i.e. perfect for a mounted patrol), just ahead on the trail there was an underpass tunnel that used to be successful grounds for thieves hoping to relieve joggers and bikers of their possessions, so this extra patrol base was added to help control that "delinquencia."  I thanked him for the information and interruption and we pushed back on down the trail. 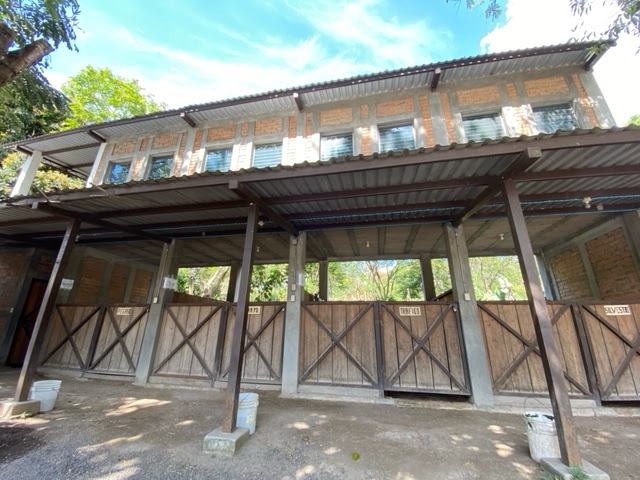 Just a few minutes later the bike path dipped down a hill to the aforementioned underpass tunnel.  Approaching it, I could see every surface covered in graffiti.  My husband was ahead of me and had paused at the exit of the tunnel (only about 20 yards long) to wait for me to catch up.  Next to him was a runner who was stopped and perhaps fiddling with his phone or something.

The first piece of spray paint art caught my eye immediately and so I paused on my bike to snap a picture of it.  The graffiti looked like a mix of art and turf-claiming tags, and so I was a bit anxious stopping to take the picture. The bird seemed an innocent and beautiful piece, but an expert on reading gang tags I am not. Perhaps MS-13 and Barrio 18 are recruiting new artistic talent these days?

It was a split second later that I heard the BANG! directly at my feet.

I'm always amazed at the amount of information one's brain can process in a split second.  They say that dreams, which can feel like feature-length movies with unfolding plotlines and complex character development, may really just be minutes long, and using that processing speed, my synapses fired off a few hypotheses:

First reaction, my go-to when surprised or upon stubbing my toe, was to scream something REALLY LOUDLY that was not particularly family-friendly. May have started with an "f" or "s."

Next my brain conducted a full-body scan to see if/where I'd been shot. No pain, no blood, still standing - good.

A millisecond later theory two developed: firecracker. El Salvador, especially at holiday time, is all about fireworks, bottle rockets and firecrackers of all descriptions. Wouldn't be hard to believe that someone came across an unexploded something in a pants pocket and put a match to it. With the highway overhead, I figured someone had chucked a lit firecracker out of a passing car, you know - just for laughs. Or were they standing just above me on the overpass even now? Were they watching? Did they choose me on purpose? Why? The bastards!

At that same time, my husband's brain was running through a similar list of possibilities.  He immediately looked at the jogger dude standing next to him, gauging a local's reaction of how possible the bang they heard could've been a gunshot. Completely unperturbed by the noise, the guy just laughed at my scream and did nothing else to react.  My husband's thought process, not saturated with the same surge of adrenaline as mine was finally able to come to the most logical conclusion, which was verified as I scooted up to him.

Damn! The front tire tube had blown out leaving a good-sized hole and the airless tire was already resting on the rim.

I'd never had this happen before and so that option hadn't even occurred to me. Plus, living in a country with - shall we say - a certain notoriety for violence, it was not completely out of the realm of possibility to think I'd been shot at. (In Juarez that outcome would've been far more likely, but my brain didn't go that far into weighing the relative possibilities.) Quickly comparing notes while I caught my breath, my husband admitted that gun shot was also his first thought, followed by becoming instantly pissed off that the other dude had taken the "sucks to be you" attitude, laughed, adjusted his ear buds and headed on down the trail without so much as a "Como está?"  His calf tattoo "Death is just another great adventure" explained it all.

Breath caught and senses regained, my husband pulled out his tire repair kit, but his good effort at a gluing a patch on the bust tube proved futile. We decided that I'd walk the bike back (no choice, really), wait with my new police officer friend and horses at the stable (sensible), and he would ride on ahead and return in the car, parking alongside the highway to pick me up (trust me - everyone does this and for far less emergent reasons).

With our plans for a day of bike riding now shot (too soon?), we decided to make the best of the day and find some lunch instead.  He pointed the car up the road that winds its way up to "El Boqueron," the blow-off part of the San Salvador volcano that rises above the city.  Part-way up, we pulled into Plaza Volcan, a terraced tree-house like complex of little restaurants on the uphill side of the road and plunked ourselves down to enjoy cold drinks and a thin-crust pizza for lunch with an awesome panorama of the city and coastal mountains. 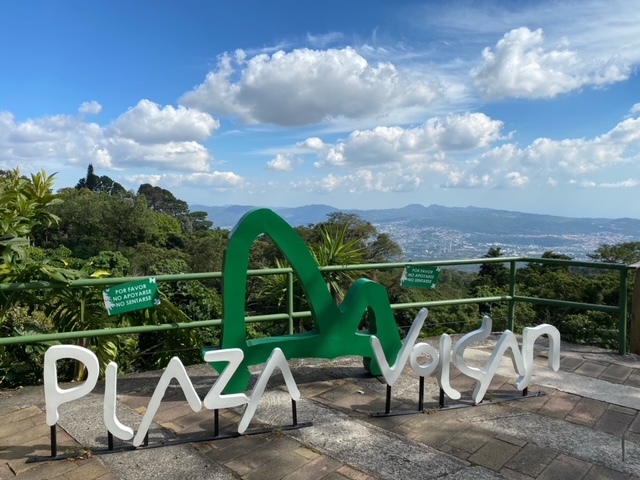 We'd set out for an afternoon of exercise and fresh air.  We ended up with a good story, a tasty thin-crust pizza, and a new favorite spot for a meal.