Beautiful Day in The Neighborhood?

We're now over two months into the dry season here in El Salvador with an unchanging forecast as far as one can prognosticate.  I was warned that I'd miss the rainy season as I was begging for a reprieve from the afternoon monsoons and ceaseless humidity.  Back in October I couldn't have fathomed the jungle drying up, its vines browning and maidenhair ferns withering and disappearing.  But here we are: 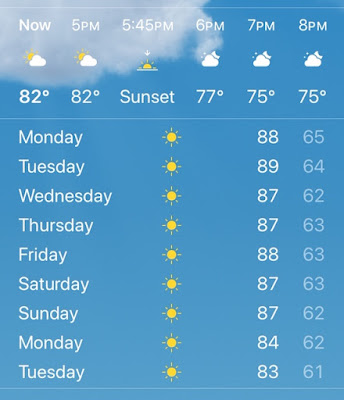 These sunny skies and a few more months under my belt have given me the opportunity to get to know the neighborhood better.  At first charmed and fascinated by the novelties I found, upon reflection - I'm also saddened by much of the reality that passes before me everyday. Let me take you on a tour:

First, some perspective: San Salvador sprawls out at the base of a few volcanoes, some easily recognizable and some look just like mountains because they've already blown their tops. 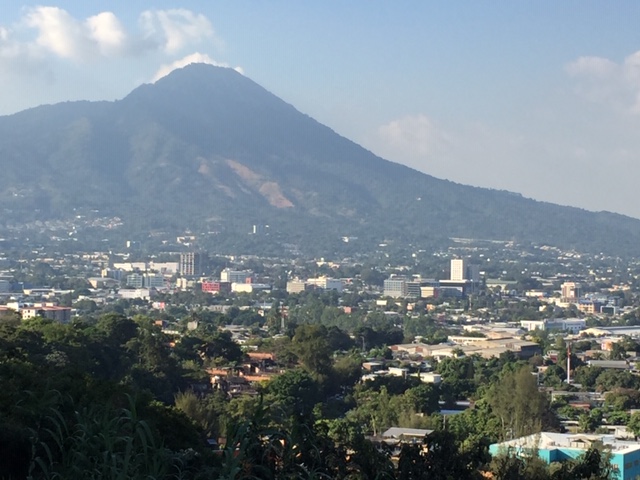 Next, this is the most colorful country I've known, from the exotic flowers and blooming trees to the murals bringing vibrancy to the omnipresent concrete block walls.


Mornings bring the daily parade of housekeepers, nannies, gardeners and handymen getting off the buses and streaming into the wealthy, walled-and-guarded neighborhoods for work. They take buses from all parts, often traveling 90 minutes or more each way. Walking against the flow involves greeting every single person you pass. With narrow sidewalks, there is no excuse for not greeting someone.  I try to mix up the salutations a bit, because I'll say this a dozen times in a ten minute walk.

If you happen to be eating something as you walk, say you grabbed an apple before leaving the house and are polishing it on your shirt before taking a bite - expect to be "buen provecho'd" by total strangers (bon appetite).

Besides the maid parade, the live-in housekeepers in their starched uniforms are already on the job and out early walking their patron's dogs, or picking up rolls from the bread guy on their bikes. The bread guys park near the neighborhood entrances, or sometimes they're allowed to enter and cruise through the streets.  I'd patronize them if they offered any variety, which so far they don't.


The gardeners, weed-whacker slung over a shoulder like a pair of skis and machetes hanging from their belts, make their way to work alongside the maids.  A bit later in the morning, you might see them with a wheelbarrow of plants as they tend the narrow grassy strips between the sidewalk and curb. 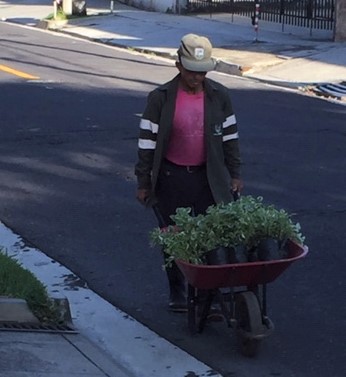 The wealthy folks who apparently have flexible work schedules and don't have to be places when the rest of us do, jog by in the latest gear. I don't worry about saying hello to them as they're plugged into their headphones and look deep in captain-of-industry thoughts. No doubt planning their mergers and acquisitions de jour.

Weekdays bring the posse of street sweepers out with their brooms, hand-sweeping and raking the leaves from the gutters and sidewalks.  Always women, and always with big smiles and hellos for passers-by. I often wonder if they curse upon feeling the wind pick up blowing down the avenue, or if they just chalk it up to job security.


Then there are the guards. I see them either in booths manning gated neighborhood entrances, or standing sentry outside single houses, pistol-gripped shotguns slung across their chests.  Those without booths assemble makeshift seats to take a load off as they pass the quiet hours of the dawn.


For hungry morning commuters there are options. Pop into the local gas station for a quick workman's breakfast:

And for those with plenty of both money and time - why not linger in one of the popular coffee shops and enjoy a cafecito, a slice of cake and some gossip with a friend?  No hurries, the maid is walking the dog, the nanny got the kids off to school, the gardener is tending the yard, and the driver is waiting in the car for when you're done with your visit.

Although perhaps you'll pop into the gown store that just opened in the neighborhood, the one above the fancy bakery and party decorations store.  So convenient to have everything so close, isn't it?


Thus the daily hustle and bustle of the day begins in the neighborhood.

By dusk, it all happens in reverse. The maids will pocket their $10-20 per day, the gardeners perhaps a bit more. The guards are often tapped for 24 hour shifts, more if someone calls in sick. One guy told me he'd filled in for a sick coworker for over 40 hours straight on duty, but he was happy because he'd make an extra $48 for the overtime.

While I love the routine and rhythm, the kind smiles and familiar faces passing by each day, I can't help think about the other side of the story. THEIR side of the story. And that's the part that I'm struggling with: the enormous gap between the haves and have-nots. Of course I'm not the first to be struck by this inequality.  But this is a really, really small country and I haven't experienced the two ends of the spectrum in such close proximity.  Across the avenue from the fanciest malls are steep ravines filled with tin and thatch shacks. When I adjust the air conditioner just a degree to be more comfortable, or when the torrential rains come and I dash around closing the windows so the rain doesn't blow onto the nice wood table or the framed artwork, I think of these folks. The cake pictured above will likely cost more than a week's salary for the maid who picks it up for her Senora. The gardener who washes his patron's Porsche SUV also carries his weed-whacker home hours on a packed bus each day because he can't afford even a beat-up pick-up.

I don't know what to do about this dissonance. So I'm just going to write about it for now.
Posted by Tabbies in Tow at 7:46:00 PM No comments: