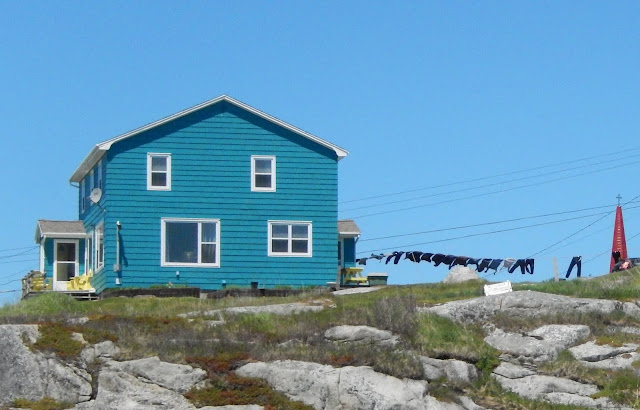 I (Think I) Live in El Salvador

I think I live in El Salvador, but these days - it's hard to tell for sure.

After 90+ days of lock down, on June 16 we exited quarantine and the country began Phase One of re-opening.  What does that mean? We can now get our hair cut, our car fixed and construction is resuming.  Even better, we can go to the grocery store any day we like.  Restaurants are open for take-away and one can drive about the country without encountering police and military checkpoints.

What it does NOT mean, however, is the re-opening of the airport, parks, beaches, mountains, shopping malls, or non-essential stores.  By mid-August, we're supposed to go to Phase Two, which would reactivate the critical public transportation system - but that next step is only penciled in for now, and lightly at that.

Unfortunately, this good news is set in front of a backdrop graphic of COVID-19 cases as steep as the Salvadoran landscape. Which means that this may be the status-quo for a while longer.


As most of us worldwide can relate, these past four-plus months have lacked a horizon to which we could aspire. To create such a destination, even while knowing I'm kidding myself, I've gotten lost in the daydreaming and distraction of imagining other places and times.

I've spent hours on real estate websites, wondering what it would be like to have a few acres in Wyoming or a lakeside cabin in Maine?  I've become entranced by HGTV's House Hunters International, Lakeside Getaway, and any of the She's a Designer, He's a Carpenter! folksy home remodeling shows, remembering a time when closet size or water damage to the sills was the worst of our problems.

I've pored through the Projected Vacancies list of overseas assignments that might, maybe, could possibly be available two years from now when we move again.

I've added murals to our garden walls like some folks add tattoos to blank spots on their bodies.

But the best thing I've done may simply be riding my bike through our neighborhood, letting myself feel movement, wind, a changing horizon and just a bit of speed.  I see, smell and feel the bank of foggy clouds that linger over the range of hills separating San Salvador from the coast, dissipating into vapor as it reaches towards the city.  It smells like San Francisco - Golden Gate Park to be exact - and lets me imagine I'm somewhere else.  I know those clouds mustered over the Pacific, which assures me that although unseen - it's still there.

I've used all the above to remember that there's more life beyond the tiny slice of horizon visible from our one-mile tether, and that I still live in El Salvador.

Then something dawned on me.

Staying completely within the current Salvadoran Phase One restrictions, and our internal Embassy restrictions, my husband and I could still actually get out into this country.  We could drive ourselves in our own car, masks on, and at least SEE something new.  We couldn't DO much when we got there, but we could see it. We could just get out and stretch our eyes a bit. Not a vacation in the sense of being able to wake up to a different environment and popping out to a cafe for breakfast, but a sensory vacation offering new sights, faces, smells and sounds nonetheless.

Which is why we got in our car and headed an hour west to the city of Santa Ana.

The first thing that struck me as we merged onto the Panamerican Highway just minutes from our house, was how busy the roads were.

What? Where are these people going and what are they doing? Were we the only dorks who were actually abiding the quarantine this whole time while the rest of the country was going about its day?  (And the corollary to that: Oh, now I see why the virus is spreading...)


The next thing I noticed was how vibrant and alive the landscape had become since we last saw it in March. The corn, seeded with the first rains of early May, had already grown head-high alongside the road, some in larger-scale farms, but most commonly, clinging to steep hillsides in patchworks of "milpas."  The milpa is the traditional cultivation of the two sustenance crops (corn and beans) on one's own acre, lot, or just a patch out back.  They're laboriously tended by macheted hands, taking advantage of every bit of soil - regardless of its location or inclination.


The next thing, well I can't say that we "noticed," but more accurately the next thing that slammed us in the face, was just outside Ciudad Arce, about 35 minutes from home.  On a long, straight stretch of rural highway we found clusters of families sitting by the roadside waving white flags at passing motorists. The white flag, be it a piece of cloth, a plastic bag, or in one case - simply a paper plate speared onto a stick, has become the signal of desperation and hunger for families deprived of their means to earn even their previous meager income due to the pandemic.  We'd heard about them in the news, but until that moment, we hadn't seen them.  They sat under cardboard or palm frond lean-tos offering little shelter from the sun and rain, and waved their pleas for help.  In the time it took us to absorb what we were seeing and pull to the shoulder from highway speed, we'd already passed through their corridor.  But with the car stopped, my husband dug out the dollar coins from his pockets and tucked them aside for the return trip.

Shortly after, we pulled into the historic center of Santa Ana and found a unexpectedly bustling city.  At least 95 percent of people on the street wore face masks as they stood in lines for the bank, grocery stores, or fast food take-aways.  I was also surprised to see street vendors out and not being chased off by the active military and police presence.  However, the central plaza park was still cordoned off with yellow police tape, and we could see many businesses closed and boarded-up.  Although in hindsight, I don't know if they were like that before this all started.

The neo-Gothic Catedral de la Senora Santa Ana was hard to miss. Built originally in the late 16th century, and then reconstructed in the early 20th century after a lightning strike burned the original version, its tall, decorative spires reached far above the low cityscape, its  bright white facade a pretty compliment to the petite-four pastels of the historic buildings anchoring each side of the plaza. Due to current restrictions, the cathedral was off-limits to visitors, but was being thoroughly enjoyed by hundreds of resident pigeons. We look forward to seeing the interior another time.


Still anxious about being out in public like this, we walked just a two-block square to get a quick feel for the place, stopping to say hello to only one person whose eyes caught mine as we passed on the sidewalk. 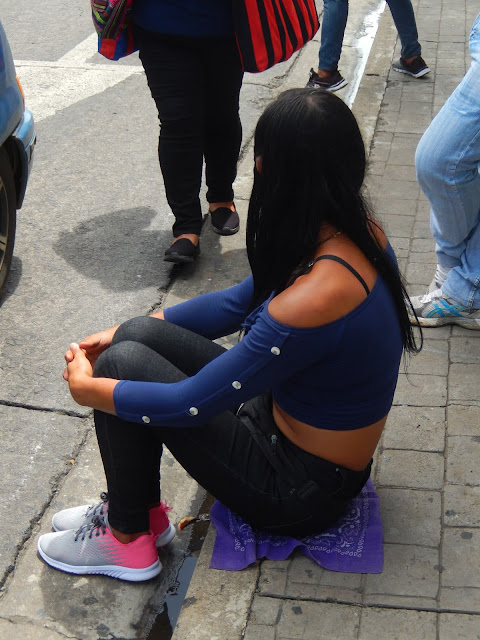 Not wanting to press our luck any further, we got back in the car and found a drive-through for lunch on the go on the way out of town.  Just beyond Santa Ana, we left the highway at El Congo where the road rose up to the lip of the enormous caldera that gives home to Lake Coatepeque.  At a mirador along the narrow road, we stopped for a tailgate picnic of burgers and an incredible view.

We retraced our route home towards Ciudad Arce and found families still on the roadside. But this time we were prepared and my husband pulled off the highway four times to offer a few dollars to each group. As our car came to a stop on the shoulder, the families leapt to their feet to rush my window, the children more mesmerized by seeing us and peeking into our car than the fact that I was handing them coins. Not long-term help by any means, but at least enough for beans and rice for a few days.

For very many reasons I didn't take pictures as we stopped, so I must apologize for the quality of these photographs taken through the window as we drove away.  But even blurry, I think people should see what life looks like now here. 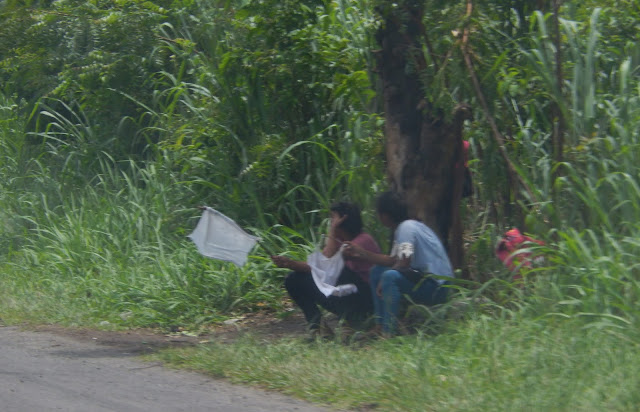 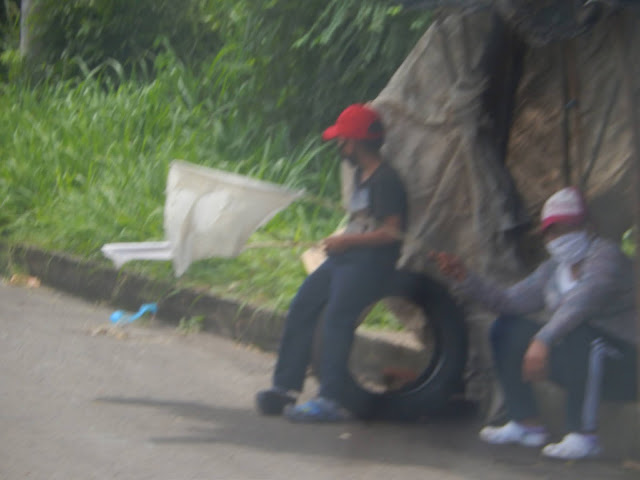 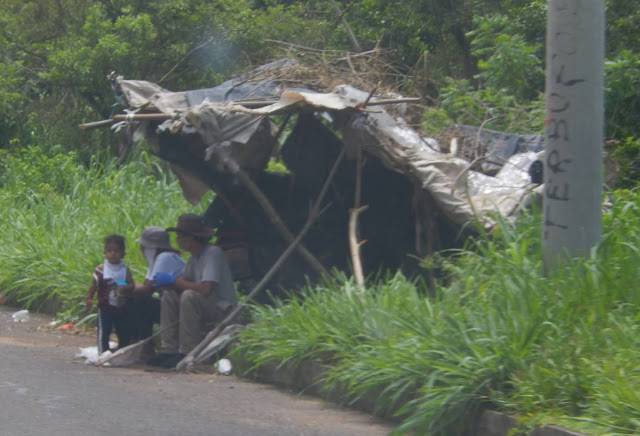 It just took an afternoon for me to remember where I am.